This article explains the below

Technology has evolved so much in the past decade. The computing power of servers is increasing, there are new applications evolving, need for larger storage capacity has increased and security mechanisms are becoming important so the IT is going through a transformation journey. Similar to the IT transformation, we have witnessed companies and enterprises growing exponentially using digital technologies. We can see companies expanding their geographical presence, increase in the customer base and consequently load on the IT systems increases. With this revolutionary shift in IT, managing the IT infrastructure and data centres as a whole became tedious, and this challenge gave rise to the technology called cloud computing.

Cloud computing is a technology where the computing is happening at the data centre over internet leveraging a pool of resources built on virtual infrastructure and usage is per the need/demand and pay as you use model. Like utility say electricity or mobile/telephone we don’t have to worry about from where and how the electricity is generated, but we pay as per what we use. The same concept is the key of cloud computing, where the companies don’t have to worry about the IT management and it’s taken care by the cloud service provider. This has helped companies focus on growth of their core business rather than worry about IT components.

In the legacy data centre as shown in figure 1, each application is deployed in silos with dedicated storage resources, dedicated server resources and dedicated network resources, in other words the compute resources are dedicated for a specific work group. 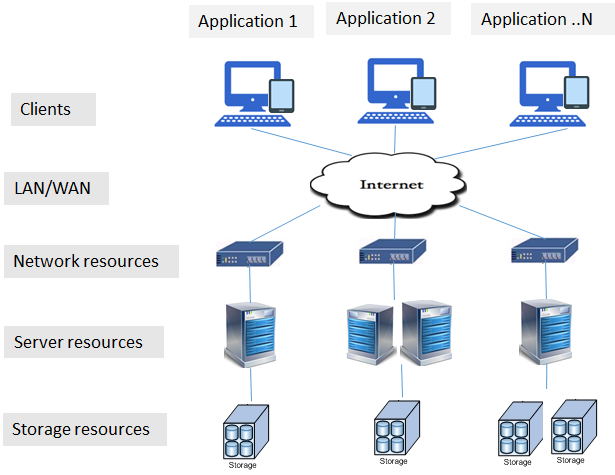 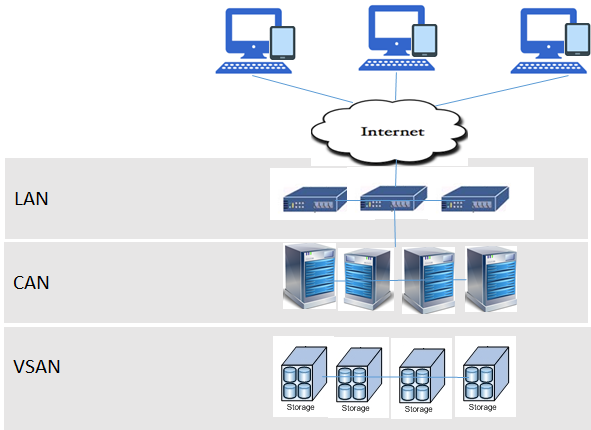 Whenever a new application like ERP /CRM or any application gets added to the system, there is a need to purchase the servers, storage, networking devices etc required for the application to run. All the components related to that application are tied to each other. As the systems keep getting upgraded and as the user base increases the infrastructure capacity has to be increased and when there no load on the system, the computing resources are idle. The inefficiencies led to evolving the loud computing. The cloud computing architecture consists of horizontal layers of shared pool of resources. All the computing infrastructure like servers, storage, networking devices etc are bundled together in the bottom most layer. Similarly all applications and software are bundled together and another layer the development software, operating system and other platforms are bundled together. 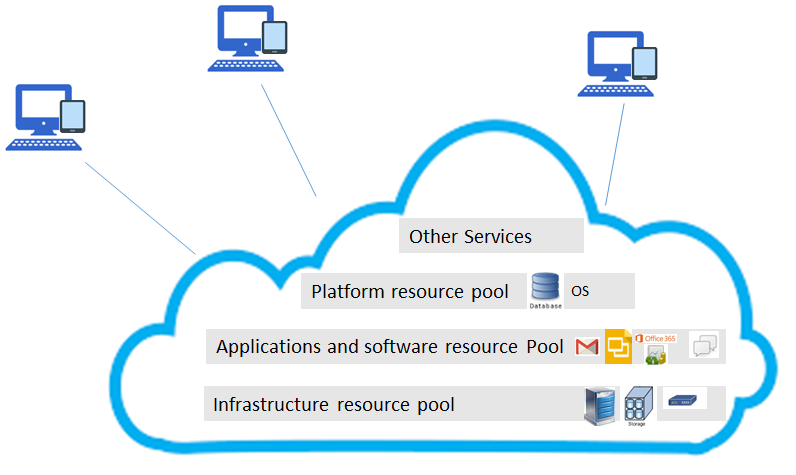 In other words, in the cloud computing all the IT components that make the datacentre have been virtually separated out – Infrastructure, Platforms and Software. Businesses can use the resources as per their demand and pay as per usage. Maintaining, upgrading and end to end management of resources is the responsibility of cloud service provider. Users select the service provider and pay for the resources you use and based on how much you actually use.

Every IT resources access virtually over internet does not mean being accessed over cloud. NIST has come up with five major attributes of cloud computing. According to the official NIST (National Institute of Standards and Technology’s) definition, “cloud computing is a model for enabling ubiquitous, convenient, on-demand network access to a shared pool of configurable computing resources (e.g., networks, servers, storage, applications and services) that can be rapidly provisioned and released with minimal management effort or service provider interaction.” 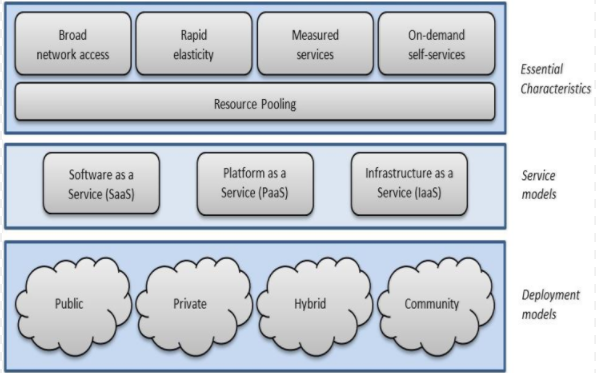 The five fundamental characteristics of cloud computing according to NIST are

There is other model called “Anything as a service model”- specific components which are not as part of any of the above models are part of this like database as a service, desktop as a service, project management as a service etc.

The deployment of services is fast and at the lower cost and the components of data centre are accessed using a thin client. There are four deployment models